If I would pick something that influenced me to choose Arnis as my martial art is would be the movie Kamagong. It start as a weekly comic series in Super Action Pocketkomiks  written by the legendary Filipino writer Carlo J. Caparas.  It was later adapted into in a movie that stars Lito Lapid as Manuel and JC Bonin as Ariel  in 1986.
The plot is about a sacred pair of arnis sticks " Kamagong".  Lorenzo (the villian) steals  the Kamagong and kills  Ariel's brother in a duel. Ariel vows revenge and to get Kamagong back from Lorenzo. Manuel and his Grandmaster trained the Ariel for his his match against Lorenzo. The movie ended with a climatic double stick battle witness by the whole town. There was even a cameo apperance of Angel Cabales.
The movie was visually exciting with alot of visual symbolism like the widow in black standing on the pinacle watching climatic battle over a huge fighting pit.
Unfortunately I could not find a DVD or even a film clip in the Internet of this movie. It is only in the cable channel "Cinema One" that gets to be rerun.
I believe this movie inspired my generation to Arnis and I hope the next generation will be inspired as well.

Posted by Genfil Villahermosa at 9:23 PM No comments:

Looking for DTS training in Manila? Master Joseph "Jhun" Tolleno heads DTS chapter in Metro Manila and holds a class in a gym in Tondo.
Being a religious man, no one will suspect  him as expert with the double stick. In fact he is a trainer and lecturer on Values Formation for the PNP (Philippine National Police). He also conducts free arnis training  named "Depensa" for the underprivileged children at Tondo Manila. Dekiti Tirsia Siradas being a blade oriented martial art has some unique drills to improve the reflex. Unlike a impact weapon like the stick, it take very little force for a edged (bladed) weapon to do serious damage. Regular practice with these drills can really improve your reactions and reinforce muscle memory. Here is a compilation of those drills.

Posted by Genfil Villahermosa at 1:57 PM No comments:

Grand Tuhon Jerson "Nene" Tortal Sr. will be in the USA the Dekiti Tirsia Siradas Summer Camp. For more details click on the photo. Posted by Genfil Villahermosa at 12:03 PM No comments:

Posted by Genfil Villahermosa at 10:11 PM No comments:

Safeguard is the security agency of the International Rice Research Institute. Grandmaster Jerson Tortal Jr. improved the security skill of the institution by training them in the art of Dekiti Tirsia Siradas for about six months They will celebrate the conclusion of their course this Feb 12, 2010. The program will begin 5:00 pm and will consist of a demonstration and graduation rites. The president of Safeguard will grace the occasion. To know about IRRI, please visit their website at http://beta.irri.org/
Posted by Genfil Villahermosa at 7:17 PM No comments: 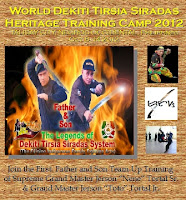